Find out the latest developments regarding Skilled Migration to Australia

Find out the latest developments regarding Skilled Migration to Australia

With some recent changes that have been brought in with regards to skilled migration program, Businesses, employers, as well as skilled migrants who are looking forward to going to Australia will now enjoy much greater opportunities than they used to. As per the announcements made by the Morrison Government on Saturday 26 October 2019, both Perth, as well as Gold Coast, will get reinstated as “regional locations” with effect from the 16th of November this year. It is expected that the two new regional visas- The Skilled Employer-Sponsored Regional Visa (subclass 494) and the Skilled Work Regional Visa (subclass 491) will also come in effect from the same time.

It may be a question of wonder and amazement to some, so as to why these changes are being made. As explained by the Government itself in its joint media release, these initiatives have come in to function as the “key pillar” for its ‘population plan’ that had been released earlier, whereby the government is seeking to ease out the pressure of population in cities that have become congested such as Melbourne, Sidney as well as Brisbane. Added to this, the government is also seeking to provide the employers along with the migrants some attractive destinations as well as incentives in order to carry out their business as well as life and work in regional Australia. Due to these changes a sharp increase of 2000 extra skilled regional visa places can be seen, taking the figures of the regional cap up from 23,000-25,000.

Permanent Residency may become a possibility

With effect from the 16th of November, 2019, new applicants will no longer be able to avail the Skilled Regional Visa (subclass 489) and the Regional Sponsored Migrant Visa (subclass 187), which was for the direct entry stream. Their place will now be taken up by the new skilled Employer-Sponsored Regional Visa (subclass 494) and the Skilled Work regional Visa (Subclass 491). With these new introductions, the eligible visa holders may even find their way to permanent residency after three years, in accordance with the new subclass 191 visa that is expected to be introduced from November 2022.

Here are some of the main differences between the new visas from their old counterparts:

The validity of the visa has been increased to 5 years. Here is a copy of the migration definition table from the press conference: 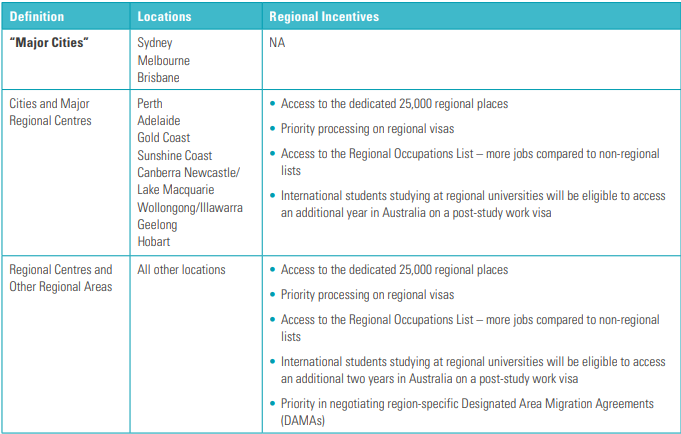