According to the new announcements made by the Western Australia Government, state border restrictions are set to be lifted on March 3 this year. Anyone who received three vaccinations and came from another Australian state can enter Western Australia without quarantining. 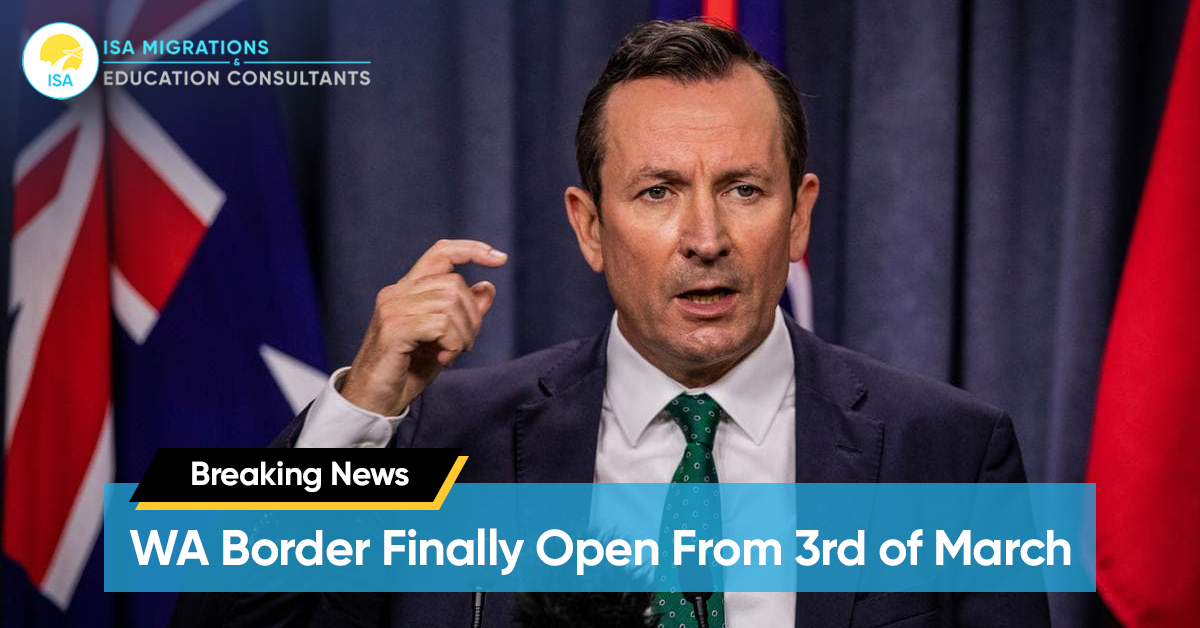 International visitors can also enter if they fulfil the specific Commonwealth requirements to enter Australia, undergo a rapid antigen test within 12 hours of arrival, and the report comes ‘negative’. They will also need to carry a registered G2G pass.

While announcing this, Premier Mark McGowan pointed out that the virus is still affecting many people and stopping its spread is not easy. In fact, by the end of March, about 10000 people are expected to be infected every day in the state.

McGown said, “Border restrictions were necessary when not enough people received vaccines in the state. But with a vast population of Western Australians fully vaccinated, it will not be practical to continue with closed borders. Our decision to lift the restrictions on March 3 will be a safe step forward for the state. We believe we have taken the decision in the right way, at the right time, and for the right reasons.

Premier Talked about Other Restrictions to Stop the Spread

The indoor mask mandate will be extended in the entire state from 6 AM Monday.
Not only that, but ‘level one measures’ will also be imposed in Perth, Great Southern, Peel, Wheatbelt, the South West, and the Pilbara.
These measures include the capacity limit of two square metres in venues, such as:

1. Entertainment venues with forward-facing seating arrangements like major stadiums, theatres, and cinema halls can operate with a 75% seat capacity.

2. Nightclubs must comply with the two-square metre rule and not allow more than 500 people.

3. The Perth Crown Casino must also follow the two-square metre rule and have seating arrangements only on the gaming floor.

4. McGowan said that these rules might sound discouraging to some people, but these will allow live music, significant events, and hospitality venues to operate safely. He mentioned, “Note that dancing and standing ovations are still allowed in the state. Our government will determine what compensation is required to give to the affected businesses.”

5. A maximum of 30 people can be invited for a home gathering. But, for a private outdoor event, this number is 200.

The State Can Increase Restrictions

As per the Premier, while people are not required to work from home, offices must take general safety measures.
‘Level two measures’ may be implemented later if the number of COVID cases increases. These measures will include:

The Premier also said that the state government would remove bottle shops from proof of vaccination requirements based on health advice.

Premier Will Spend the Quarantine Week When the Border Reopens

When the border restrictions are lifted on March 3, any quarantined arrivals will get permission to go outdoors.

Premier Mark McGowan will be required to go to Sydney to provide evidence in a defamation case brought against him by mining billionaire Clive Palmer. He will return from there a few days before March 3 and, therefore, will be in quarantine when the border reopens.
However, he has marked that he will remain in quarantine after March 3 and complete the full seven-day isolation.

He said, “I cannot avoid this coincidence because I will have returned from Sydney when the border reopens. But, I will be working from my hotel room and will complete the full seven-day isolation. I will do this so that no one can assume that this arrangement was made for my personal benefits.”
The Premier was asked whether the public could trust the government about the reopening date because it was changed last.

But he clarified, “The borders are reopening just 13 days later, which is a lot closer compared to the last time. The date is fixed, and there is no chance of any change.” He admitted that the rapid spread of Omicron was completely unexpected.

The state borders were closed for visitors on March 24, 2020. It means Western Australia is opening them after almost two years.

Previously, McGowan had announced that the borders would open on February 5. But then the Omicron variant appeared in the scene and changed the situation.

On January 20, hospitalisations, cases, and deaths skyrocketed, which led McGown to announce an indefinite delay in border reopening. The government was under pressure from the general public, unions, industries, and the Opposition party.
But with the new announcement, people are expected to heave a sigh of relief. For more information and latest updates, please stay tuned with migration experts at ISA Migrations & Education Consultants.